An artistic intervention by Dorit Margreiter and Maja Osojnik

Curated by Felicitas Thun-Hohenstein and section.a


At the invitation of the Mahler Forum for Music and Society, the artists Dorit Margreiter and Maja Osojnik developed the artistic intervention Exposition in resonance with the site of Mahler’s composing hut in Maiernigg in 2022. In the interplay of architecture, sound and drawing, a sphere emerges in the middle of the forest near Gustav Mahler’s creative retreat. It echoes the structure, the histories of its use and the sound palette of its surroundings. Here, “silent sound installations” and “musical cartographies” by Maja Osojnik meet “architectural markings” by Dorit Margreiter. This synesthetic setting of past, present and future invites visitors to pause and embrace and become part of the environment.

an installation of scaffolding poles in the forest


Dorit Margreiter’s artistic interest lies in the interconnections between visual systems and spatial structures and the consequences this has for our daily social life and the ways they are perceived. In dialogue with
Gustav Mahler’s composing hut – a historically significant site – Margreiter’s art installation, which incorporates components of architecture and display, explores the relationship between the past and the present as well as the relationship between representation and fiction. The striking three-dimensional structure made of scaffolding poles has the outlines of a traditional building situated among the trees. Built as a single-storey, gable-roofed structure, it mirrors, like a slightly larger doppelgänger, Mahler’s composing hut, which is visible nearby. The construction of scaffolding poles evokes an intermediate stage, something on the verge of becoming instead of a final state of completion. It is an openly built idea, nothing about it is set in stone. Here, authorship is interpreted as universal and not as belonging to a singular genius. Unlike the composer’s brick-and-mortar retreat, Dorit Margreiter’s house claims a space without claiming to create space. Her house has no walls that might exclude, no locking doors that signify ownership, no windows that let in wanted light but keep out wind and rain. Her house lets Everything in. It doesn’t filter anything out; it belongs to Everyone. Its open construction is a maximum of inclusion, permeating the dichotomy of inside and outside, of fixture and building. Here, nature and thus change take place permanently. Here, there is no such thing as the empty, impervious space that is a sealed vacuum. Here, we are part of the universe’s happenings.
Exposition is an exhibition space that turns the space of retreat into a public space.


The forest. A place of transformation and change. A threshold between this world and the next. A lung. Elixir of life. A green house full of layers. A retreat. Silence that is not silent. A hiding place. Layer upon layer. Let’s hide together. (Maja Osojnik)

In Exposition #01 Maja Osojnik embarks on a musical transformation of this specific site. Similar to an interactive game, the composition is conceived as a kind of listening exercise for one to nine people. Nine sound maps – resembling graphic scores – are placed at select spots around Mahler’s composing hut. Each represents an instrument in the composition, which the audience may access via mobile phone and QR code. It is up to the visitors to decide whether to enjoy this polyphonic work as a contemplative solo event or as a communal experience. Exposition #01 is an on-site acoustic interplay with nature. Maja Osojnik manipulates the prerecorded sounds and replaces natural sounds with the sounds of the forest’s musical instruments. By playing back the digitized parts, a new aural architecture is created on top of the natural soundscape. The result is a collage, a pas de deux between nature and cyborg nature, determined by the number, proximity and distance of the mobile-phone owners.

Listen to the composition!


On July 2, 2022, Exposition #01 will provide the setting for the premiere of Doorways 9 / a sound postcard to an abandoned home, a composition developed for the soloists of the Orchestra for the Earth. The ensemble is actively involved in creating the sonic cartography and invites the audience to perceive the site as a multilayered auditory experience. The improvisational element turns Doorways 9 into a fluid piece in constant metamorphosis, demanding careful engagement with space and time. 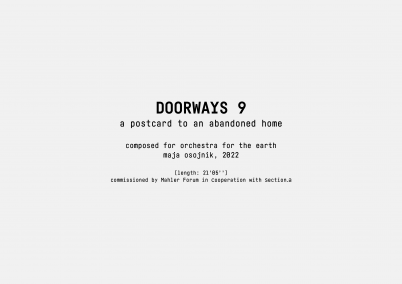